What is a Side Hustle and can it work for me?

Home > Career  > What is a Side Hustle and can it work for me?

21 Apr What is a Side Hustle and can it work for me?

Posted at 17:15h in Career, Lifestyle by Sharon Hughes

Working in Career Coaching, the Side Hustle has often been the solution to seemingly insurmountable career hurdles for my clients, but its still a relatively unused practice. I am a HUGE fan of the Side Hustle, so I’d like to properly introduce you to the concept and if you have a big idea you’d like to try, maybe it could work for you. 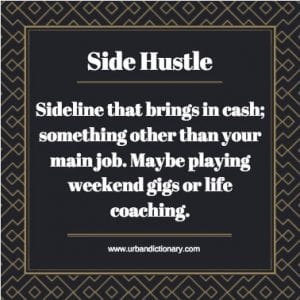 ‘Nixer’ from the word ‘nothing’, (as in no tax or insurance), was a job you took on the side. A nixer could range from regular un-declared work, to once off jobs, but maintained a simple premise; work outside your ‘proper’ job. During the boom, nixers fell out of fashion. We were all earning enough in our jobs to need extra cash or to rock the boat looking for career change. It became more difficult to find extra work that was not recorded and the responsibilities of extra income was seen as too much hassle.

With the recession, there has been a huge change to the understanding of a job. People don’t simply work 9-5, Monday to Friday any more, and they don’t always work in areas they find fulfilling, so a gap has opened up that suits the Side Hustle. A Side Hustle is not just an extra job, but a personal project beyond the confines of your ‘proper’ job.

What makes it a Side Hustle?

It might be a regular evening job someone maintains outside of their job, like Teaching. It might be contract work someone uses outside their job in a freelance capacity like Graphic Design. Sometimes it’s the professionalising of a hobby someone loves like Blogging, or the practice of developing professional skills like Coaching. It might even be the starting of a dream someone has to write a book.

There is no restriction on what counts as a side-hustle. The only qualifier is to begin with, it doesn’t count as your main job or source of income. It may or may not make money. You may or may not have customers. You might be the only one who even knows about it for a long time, but it’s a project that’s yours that you work on in your own time.

How does a Side Hustle develop? 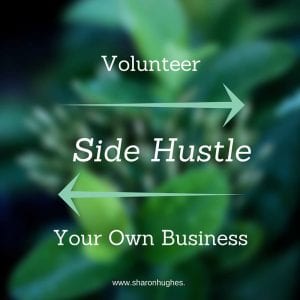 Some of the most common themes I have come across include:

Volunteering is a common way people end up in a side hustle. Whether they join for fun or professional curiosity, people who enjoy volunteering outside of their main career often use their volunteering to kickstart a Side Hustle. Many people who work full time in the Events industry came from a volunteer background first, then worked their way to a freelance side hustle. Eventually many graduated a Side Hustle to a full time job or business in the industry.

What are the benefits to the side hustle?

Some of the amazing benefits I have seen personally include:

There are a host of other benefits including; continued professional development, up-skilling, growing your network and in all cases, having a lot of fun doing something you’re passionate about.

Some great examples of what could count as successful Side Hustling in Ireland today include:

Why would it work for me?

Whats so appealable about the Side Hustle is the privacy. Many women I work with have big dreams that they have lost sight of for various reasons. Those dreams and ideas are always in the background niggling, waiting to be realised. The Side Hustle works in two ways for them:

How do I get started?

The great thing about a Side Hustle is that it is your own personal project, how you do it and at what pace is completely up to you. There are some serious things to consider depending on your own hustle like insurance, legal responsibilities and tax, but none of this is insurmountable. Each part you learn is another piece of learning you can bring to your next job, promotion or even your own business.

Ultimately a Side Hustle is a fantastic blend of starting your own business, as a project, in your own time and at your own pace. A fantastic combination for budding entrepreneurs!

As always, if this is something you are interested in and would like to discuss more, please drop me an email for more details on arranging a tailored session just for you!