Knowing your own Enough

Home > Lifestyle  > Knowing your own Enough

04 Mar Knowing your own Enough

Posted at 15:29h in Lifestyle by Sharon Hughes

Recently I worked with a client who was really stressing out because no matter how hard she worked she didn’t feel she was doing enough in her life. Enough career stuff, enough social stuff, enough life stuff. This comes up with people I work with a lot, and it has a surprisingly simple cure. You see the problem is usually not doing enough; the problem is usually the definition of enough. Todays post is going to look at one simple way you can stop comparing yourself to others and accept your own ‘enough’.

So I ask my client; ‘Well, whats ‘enough’?’, and I usually get something like this;

‘Well, Sandra in work got promoted’, or

‘Emma is on a yoga retreat in Bali’, or

‘Danielle is sky-parachute-ballooning with her 2nd husband off a cliff in Norway’… (Theres always a Danielle!)

Basically, using other peoples lives to gauge what we feel is ‘enough’.

The problem with other peoples enough

A real stumbling block for many people is seeing how ‘well’ all of their friends are doing in their jobs and lives on Social Media. Its easy for people to use friends success as a way to further highlight their own perceived ‘failure’, when you’re comparing yourself to someone else. 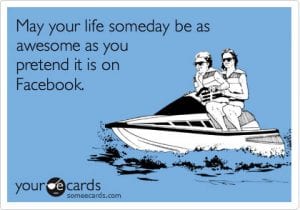 The problem with comparing yourself to others is that it can often be the sheer absence of an activity someone else is doing, as opposed to something you didn’t do, that makes people feel inadequate. For instance, ‘Jane went to the gym, crap, I should have gone to the gym. Now I feel shit I didn’t go to the gym. I never work out enough…’

You didn’t fail at going to the gym. You never intended on going to the gym, but already you feel like you’ve messed up, that you haven’t done enough, but only because you’re comparing yourself to Jane.

The real problem with ‘enough’ is that is so personal and it is never measurable. Whats enough for me may never be enough for you, and vice versa, so using ‘enough’ as your target, well, you’re never going to hit it. And if you do happen to hit skinny enough, or smart enough, or rich enough, you’ll never even know it. You’ll be just trying for the next ‘enough’.

The solution is surprisingly simple. It takes a bit to get used to it, but it is a fabulous habit to make.

Define your own Enough.

The next time you find yourself thinking you’re not ‘x’ enough, define it, don’t compare it.

Instead of comparing your gym schedule to Jane’s, define your own gym schedule. Say three times a week. Instead of seeing Jane’s gym post and thinking, ‘I don’t go to the gym enough’, think about if you’ve managed to get to the gym 3 times this week? If you have, fabulous! If you haven’t, re-define! Either reschedule to hit your target, or re-assess how realistic your target was and maybe reduce it to twice a week.

I really experienced this on maternity leave. Like all new mams I wanted to do everything. Be fit and healthy, cook dinner for my family, breastfeed, go for mindful walks, do baby massage, and baby yoga, and baby sign-language and, and, and… But also like most new mams I was flipping exhausted, couldn’t make my new buggy work, couldn’t find my bra and had two twixes for breakfast most mornings. It seemed like everyone online had their mam-game together except me and I wasn’t good enough.

Eventually I re-assessed my ‘enough’. I set my ‘enough-thermometer’ for; a fed and changed baby, and everyone alive at the end of the day. It might not sound like much but suddenly, magically, I was enough. Not because I was doing more, but because I defined what enough was, it was achievable and I could do it.

So the next time you hear yourself say ‘enough’, stop for a minute and ask yourself what the exact definition is for you in that scenario and pledge to only compare yourself to your own ENOUGH.