Posted at 20:41h in Career by Sharon Hughes

Over the coming months I am excited to be posting a new Blog series called the ‘Job Search Series’. This series aims to de-mystify some of the elements around the Job search and application process. It will also include some of my own tips for helping you get to interview, and performing well. Today I’m starting with Interview Panels and a look at how Job Interviews actually work.

Preparation is key, and knowing the processes immediately gives you a head-start over other candidates. The fact is, there are processes, they’re just not often common knowledge outside of Human Resources.

One of the toughest parts for most people is the Interview. I am not a HR professional, but I have sat on a number of Interview panels over the years, for both my own company and also as an external for other companies. It has been an eye-opening experience, and here is what I have learnt about Interview Panels and how they work.

Who sits on an interview panel?

Every organisation has its own rules and guidelines for who sits on their panel. These guidelines are usually available from the HR department. In general, there are three people you will see on your interview panel.

I have never seen a panel smaller than three, but I have sat on panels up to five. Sometimes the organisation might choose to use both a Director and a separate external expert for the role. In other cases, they might include a stakeholder representative, particularly in the not-for-profit sector. Essentially, once the initial three panel members are assigned, the rest is organisational preference.

There should be gender representation on the panel. Sometimes this can increase the size of the panel if the other managers are all one gender.

Yes, 100%. I’ve worked with people who seem to think that the interview panel ‘made it up’ as they went along. While this might happen in very small organisations, in any medium to large organisation there are definite guidelines to be followed. This has become particularly important since the introduction of the Freedom of Information act ,which can potentially give applicants the right to see their interview marks.

There is always a Job Description, and don’t even apply if you haven’t seen a Job description in advance and the panel are given a corresponding marking scheme to the JD. The scheme is numerical, and designed to be not personal in any way. It usually accounts for very general elements like:

How do the Interview Panel mark the interview?

An Interview Scoring Bar is set before the interviews begin which is the minimum mark accepted by the company for candidates to reach. Most interview panels I have sat on the bar is set at 80, essentially meaning you have to get 80% to ‘pass’ the interview.

Each section is weighted by 5. You are marked out of 5, which is then multiplied by 5. This is then added up for a potential 125 marks. This is then calculated into a percent. If the bar is 80 you must get over 80% to be considered for the role.

It is worth noting that hitting the bar doesn’t mean you will get the job, and not hitting it doesn’t mean you won’t. I have sat on interviews where a candidate hit the bar and wasn’t offered a post. I’ve also sat on an interview where the candidate didn’t hit the bar but got the job. In this case, the candidate was offered the post on a probationary period, with conditions attached to the post, so don’t underestimate the power of fit.

What is the most important factor for the Interview Panel?

You will not get an interview for a role if you don’t have academic or technical competence for the job, so it is assumed that to be called for interview you have the technical proficiency, or academic potential, to do the job.

This leaves the absolute number one issue for any panel I have sat on as being ‘Organisational Fit’. I have seen good candidates lose on this, and candidates who may have been weak on paper win. In these cases their loss or win was purely based on perceived organisational fit.

It’s a given by most panels that if someone comes across as being able to fit in with your team, and achieve your organisational values, that they can learn other skills as they go along. Learning on the job also has the added advantage of a candidate growing into a role.

You can’t teach organisational fit and that’s why it is the most important aspect to the interview.

Does everyone get interviews? 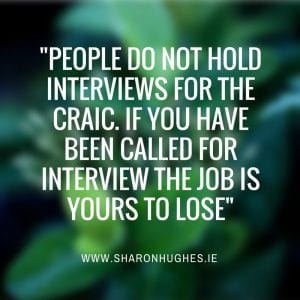 There seems to be a myth out there that organisations just bang out interviews for fun. Its simply not true because interviews are hard work for an organisation. You have to take at least three staff members out of action for a day which costs money. You often have to schedule external panel members as well. Smaller organisations have to pay to rent interview space. Interviewers take it seriously, they can’t afford to make the wrong decision so interviewing is exhausting.

People do not hold interviews for the craic. If you have been called for interview the job is yours to lose. You have been deemed technically competent to take the role. You just need to show the panel why they should pick you.

Remember, the Interview Panel are people

People are interviews, interviews are not inanimate objects. Remember that the Interview Panel are people who are trying to do their best, just like you. Its hard to choose a candidate from so many great options, and knowing you will disappoint more people than you will please isn’t the nicest way to spend a day. So nervous as you are don’t forget, the Job Interview Panel are just people too.