My experience Floating to Relax 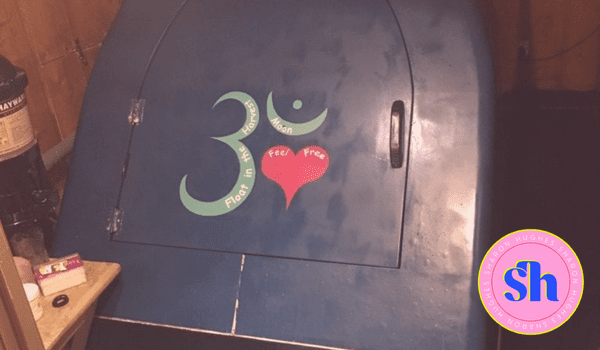 05 Jun My experience Floating to Relax

Posted at 08:17h in Health, Lifestyle, Self Care by Sharon Hughes

2017 for me, was a year of doing. It was fun and I achieved a lot, but it was also a good reminder to slow down a bit. I was also sick a few times this winter, which is not like me. I thought a lot over Christmas and decided I would make a better effort with my self-care in 2018. I’ve spoken about the importance of self-care before HERE . I’m a recent advocate and I’m trying lots of new options and top of my list for January was floating to relax. I get asked about it a bit, so today I’m going to share my experience floating.

How did I get into Floating?

Years ago when I was training as a coach, we were talking about ways of self-care. Like many Irish women I struggled with the concept of ‘treating’ myself. I also happen to be a high-energy person. More ‘traditional’ ways of relaxing like massages and meditating etc tend to stress me out a bit. Ironic, I know! There was a lovely woman training with me called Agnieszkia and she came up to me one day and gave me a small card. She said; “I really, really think you will love this”. I knew she floated herself, and the lovely woman had decided to gift me her ‘free’ float after buying ten. Ironically, I think if she bought a voucher I probably wouldn’t have used it, but because she gifted me her free one, something she loved, I knew she REALLY wanted me to try it!

First of all, it is a sensory depravation experience. It is designed to eliminate all external stimuli; sound, vision, everything. The theory being when you stop ‘sensing’ you can start ‘being’. Many people report having ‘out of body’ experiences in the tank, (I didn’t), but for lots of people the sheer space of nothing can be super relaxing.

Secondly, the tank is full of epsom salts so you float completely. You can barely sit down its so, well, floaty. Your body relaxes completely. COMPLETELY! It doesn’t have to move to get blood flowing, or balance on a bed, or fight that pesky gravity! Even when we’re relaxing at home, your body is still doing something; balancing, making sure blood is circulating etc. In the tank, your body gets to relax in a whole new way. Brain cells that are normally taken up just living, can focus on some good stuff; like repairing and nurturing.

The combination of floating and peace helps produce theta waves. This is the good stuff where ultimate creativity happens. It estimated that an hour in the tank has the same effect as 6-8 hours sleep. They claim it can help with chronic pain. Many athletes use it for recovery.

One theory I read was that the dark, warm and floating sensation is similar to being in the womb. The writer hypothesised that your brain reverts to a certain time, a certain muscle memory, from when you were just beginning. That it begins to ‘re-order’ your cells to the perfect, healthy body. Just like when you were in the womb. Extremely meta, but a nice thought all the same.

Yeah, I get that seems gross. But actually theres so much epsom salt nothing can survive. It is also filtered after every use. The salt is actually really good on your skin too. I have eczema, and once I’m over the initial sting, my skin feels great afterwards.

Theres no disguising this; its a giant septic tank with a door. As you can see, they popped a nice sticker on it. This is the tank and the one I use. 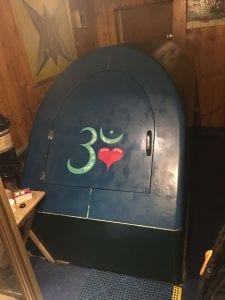 The tank is just a bit bigger than a person. In the room you also have a small toilet room and a shower for before and after. Its a tight squeeze but it does the job.

My Experience; The First Time

If you plan on trying this, definitely have a ‘trial’ with no judgement. My first time was chaotic. I was paranoid I needed to lock the doors. Then I had to put the light on in the tank four or five times to make sure it was working. Then I opened the door a few times, because I was freaked I couldn’t hear anything.

When I eventually settled IN the tank my neck hurt. I got the floaty neck cushion thing and that helped. Then I scratched my nose, only it was so dark I couldn’t actually see my nose so I got salt water in my eye, which stung like a bitch. After that I had a mild wave of claustrophobia. Then I got out again to double check there was no-one in the room…

After about 30-40 minutes, I found my groove. I could feel myself relaxing more. I noticed that I had aches around my shoulders and lower back that I don’t normally notice. Eventually I heard the knock to get out. Even though I felt I had been 5 minutes, it was definitely longer, so I knew something had happened. I decided I’d try again.

My Experience; The Second Time and since

The second time I was probably about 15 minutes getting settled. Just as I was thinking; ‘its nice, but not for me’, I heard the knock. I couldn’t tell if I had been asleep or awake, but I was sure I had lost almost an hour.

My most recent time last week, I got into the zone within ten minutes. Theres this amazing moment where you just can’t feel anything. Your body is literally so relaxed, with no pressure anywhere, that its in a sort of limbo. Its amazing. You feel like you’re lying completely still, then suddenly you feel yourself brushing off the edge, so you’re obviously moving.

Its an hour of time for yourself, for your body, that you can claim no other way. Absolutely 0 distractions, its amazing.

Where and How much?

The place we use is called Harvest Moon on Baggot Street. Its the Stephens green end, only 10 minute walk from the centre. Its in one of the basement buildings. I have never heard of anywhere else in Dublin city. Thats not to say I’m stuck with them, they are genuinely the nicest people ever, I’d use them even if they had competitors. 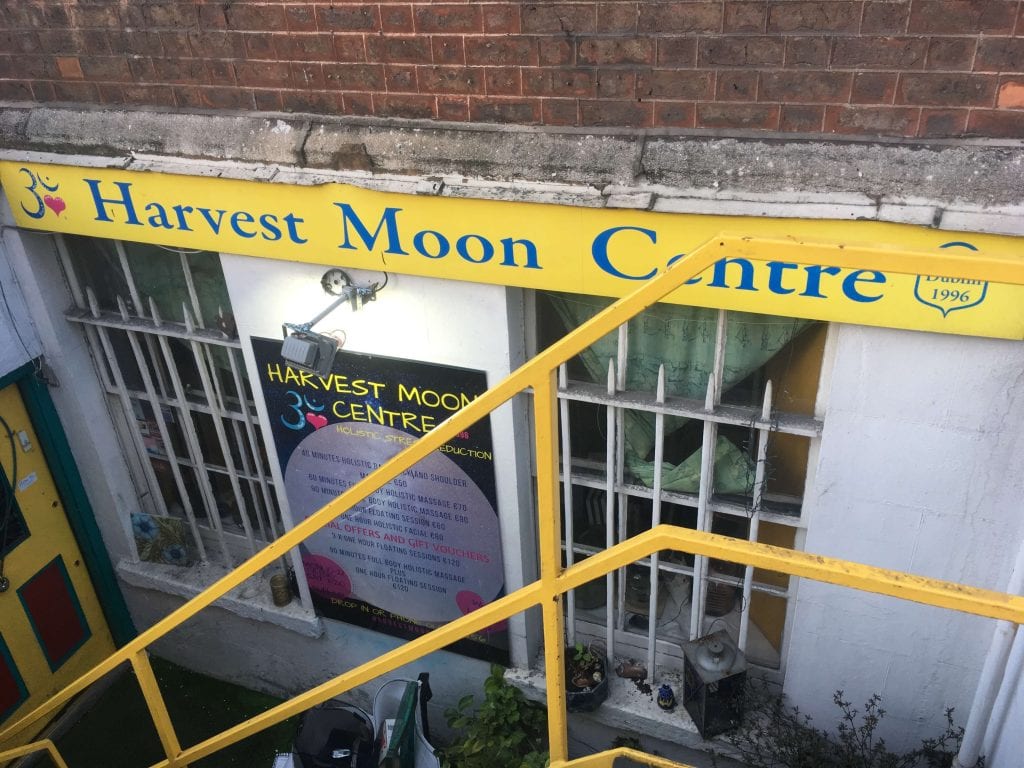 They also do massages and other alternative therapies which go great in tandem with the tank. The price to float for an hour is €60 but they regularly do Groupon deals and Facebook deals for multiple purchases that work out at about €40 per session.

Would I recommend it?

Absolutely. Its now one of my favourite methods of self care. Its very odd, I won’t lie. It takes a lot of getting used to. But for me the feeling afterwards makes it worth the effort of ‘learning’ how to do it. I can’t pinpoint the feeling like with a massage, I just feel calmer. More relaxed. Like I’ve had a lovely break and feel refreshed. I know my body and brain both like it and that makes it amazing for me.

Let me know if you’ve floated or if its something you’d consider doing in the future. Also any questions pop them in the comments and I’ll come back to you!