Top Tips for applying to be a TEDx Speaker

Home > Career  > Top Tips for applying to be a TEDx Speaker 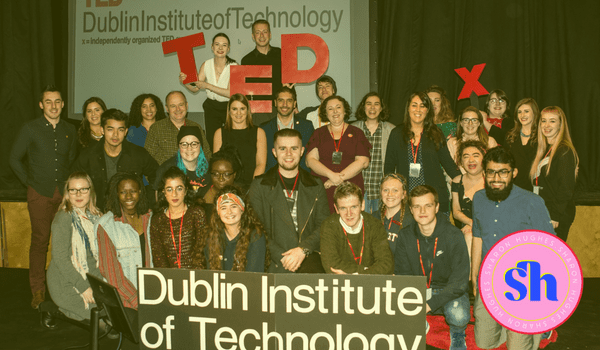 13 Mar Top Tips for applying to be a TEDx Speaker

Posted at 08:15h in Career by Sharon Hughes

In 2017 I was asked to help with the TEDx Ha’penny Bridge event running in Dublin. I was delighted to be involved as a Speaker Coach. My own organisation then hosted our own event late 2017. I’ve always loved TED Talks myself, but I was surprised by the amount of people who applied to speak at the events! Over the course of a few months I saw over a hundred TEDx speaker applications. Obviously some of them were amazing and they got the gig. Equally, there were issues with many applications that could be easily addressed. I made a note to write a post on my observations, and here they are!

A special shout out to Ciara Murnane, co-organiser of the TEDx Ha’penny Bridge , Diarmuid McCleary, co-organiser of TEDx Dublin Institute of Technology and his colleague Ruth Murray. I asked them for their own input from their events and its included below.

Top Tips for applying to be a TEDx Speaker

There is a huge corner of the internet already dedicated to TED events for both organisers and speakers. These were just my own observations from working on two events last year. Based on my own experience my number one tip is this:

Google what a TED and TEDx Talk is and learn the rules.

I’m not trying to be facetious, it was just really evident to us that a number of applicants didn’t understand the premise of the TED event at all. There seemed to be a lot of confusion, much of which I cover below. At least watch a few TED or TEDx talks before you try to join the club. There are very strict and very clear rules for organisers AND speakers. You can check them out HERE.

What not to do

I know it seems counter-intuitive to start with what something isn’t, but to be honest, we saw these issues far too much to not address them first. Ask yourself why you want to give a TEDx Talk and if its any of the reasons below, it might be worth reconsidering your approach.

It is not a Public Speaking gig.

This was our biggest take. People wanted to publicly speak which is not what the TED premise is about. TED, (Technology, Entertainment, Design btw), are supposed to be educational, not inspirational. Your ‘story’ does not make a TED talk. You should not be applying to give a talk on a topic you already teach or speak on. If you disagree with this, and people do, I’d suggest you google a lot more on TEDx events before you apply.

Both the events that I worked on ran Speaker Training days and featured Speaker coaches. Many of the participants were very confident and accomplished public speakers, but they all acknowledged afterwards the big difference between doing a Speech, and doing a TEDx talk.

It is not a circuit.

We got applications from people who had already completed a TEDx talk in recent months. Most TEDx organisers will require you to leave at least a year before between talks. Having repeat speakers damages reach and promotion. Also if you have already given a TEDx talk on a topic, you should not re-do that talk. TEDx see every video before it is uploaded to the TED channel. They will penalise for this. If you do want to apply for a different event and with a different topic, you should be open with the organisers. They will find out via TED if you are not.

Do not apply multiple times with different talks

We had a few applicants who submitted multiple applications with different topics. The whole point to a TEDx talk is that you are considered an expert on your proposed topic. Submitting multiple applications looked like the applicant was more interested in being a speaker than they were in the subject of their talk, which just doesn’t fit with the TED ethos.

Your Inspirational Story is not a TED talk.

TEDs tag line is ‘Bringing ideas to life.’ They aim to spread ideas. Many people get famous from their TED talk and many of them tell their story within their TED talk. However, their story is a part of a bigger premise. Usually their personal story is included in one of two ways:

Many, MANY, TEDx and TED talks don’t reference the speakers personal life at all, other than to introduce themselves. Don’t believe me? Google some of the highest ranking TED talks and see how little the speakers refer to themselves. TEDs are not Public Speaking events and having, what you believe is, an interesting story isn’t good enough to warrant a space on the stage. 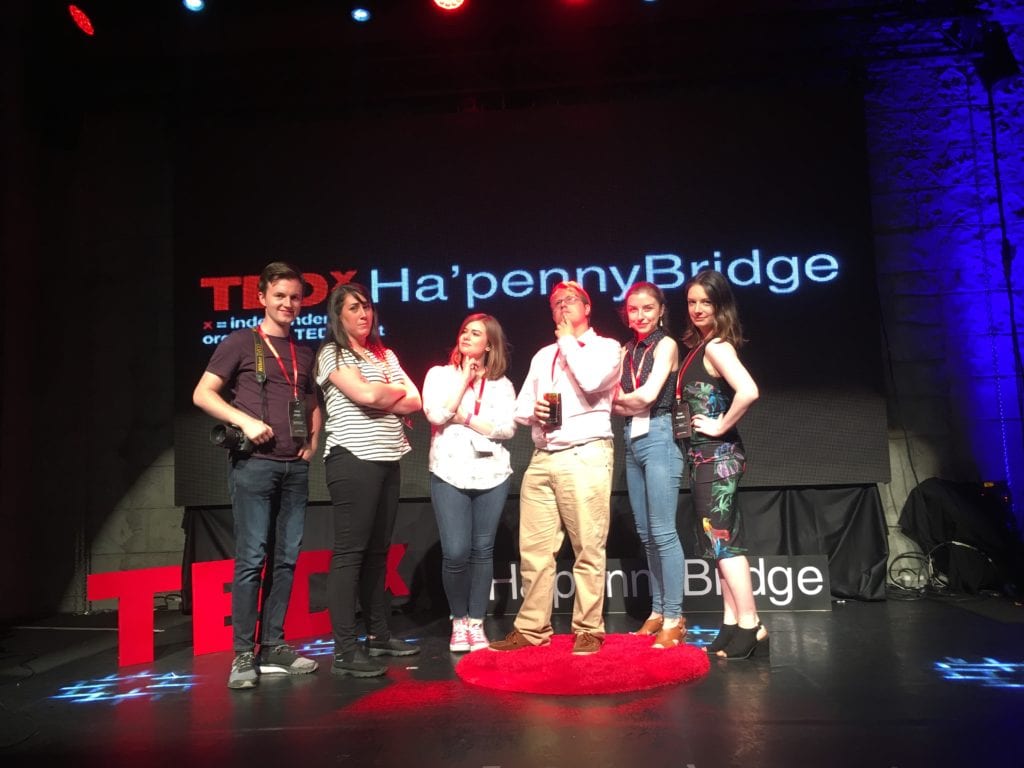 What to do well

To be honest, this is very similar to the earlier points but it was clear from the applications that many people didn’t have an actual topic. People had some amazing stories and inspirational experiences, but they just weren’t transferable. The TEDx audience should be able to go home thinking: ‘If I do the same thing I can achieve the same results’. Your personal inspirational story, without a point, won’t do that.

Make sure you’re applying for the right event.

We ruled people out very quickly if they had the wrong title in their event. To be honest I was shocked it happened, its like applying for a job at the wrong company, but it did. When you are trying to eliminate people from the start simple things like this make it risky to choose a speaker who might leave for an alternative event.

We asked for a few small details and links and lots of people simply didn’t send what we asked for. When you’re running such a high profile event as a TEDx you can’t afford to take someone on who isn’t committed. Showing a casual attitude at the start is a red flag to organisers.

If there is a proper application process, (many smaller events just have an open process), make sure and give as much detail as possible. Even if you feel like you are repeating yourself, keep at it. In many cases the applications aren’t looked at individually, they may be ‘grouped’ according to a particular element of the application form. If you don’t have each part filled out properly, your application may get overlooked.

Provide a draft or an outline.

*This was the one point everyone that fed into this article stressed. Detail and lots of it was the general theme.

You should have point first and then a rough draft, or outline of the talk can really give the organisers a sense of what you’ll discuss. It shows you’ve thought about the topic enough to deliver a solid TEDx talk. It will also show that you are committed to the talk. We had a bit of bother with people trying to change their talk once chosen. The organisers choose the speakers as a group, changing your mind afterwards is not an option so have your talk ready.

Make sure you have somewhere you can send them.

In this day and age there is no excuse to not have some online real estate. I have a useful post HERE on establishing a Personal Brand. Set up a single page website with an introduction to you, your bio and some pics. I would also suggest googling yourself. Its highly likely the organisers will so make sure they see what you want them to see.

In two cases a short video accompanying the application got an applicant through that may not have made it on paper. These were shot using a phone in a kitchen. They were not high-tech, but being able to see and hear the applicant brought the whole idea to life for the organisers.

All TEDx events have two audiences; The people in the room, and the internet. It is really important that your talk is designed to appeal to both groups. If you have a particularly scientific topic for instance, its good to use more generic language if you know your live audience won’t necessarily be from a science background. Similarly, if you have a great local topic, make sure and put it in an international context so it will translate across the internet. Again, having a draft included in your application will show the organisers you have considered this. 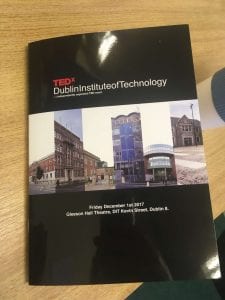 Then there were the few applicants who went the extra mile. It wasn’t particularly difficult but it made the team feel that the speaker would be a part of the event and not just in the show.

What will you bring to the table?

Like I said, TEDx events rely on promotion and sharing. TEDx events are also designed to ensure organisers can’t make profit on an event. How will you use your Social Media channels to share the event? That ‘audience’ you’re so sure of? What will you do to promote the event to your existing network? Do you have contacts that can help with goodies for goody bags etc? And also, why are YOU the best person to deliver this talk? Sell yourself. Hard.

TEDx events are highly reliant on the promotion of the event by EVERYONE involved so seeing your available audience is important. It will also give the organisers an idea of who would come to see you speak. Be careful though, if you claim in your application you’ve delivered a talk to thousands of people and you only have 14 Facebook likes we’ll find it hard to believe.

One thing I didn’t not realise was that TED people TALK!

To get the license to run a TEDx event you speak with TED staff in New York. There are TEDx event workshops where organisers can meet and discuss events. Most organisers contact people who have already run good events. We worked closely with a couple of past organisers and equally we have already been contacted by people who are looking to run events this year. A lot of the suppliers are shared.

Whats my point? Don’t be rude!

If you don’t get chosen to speak, BE POLITE! Emailing people telling them they made a terrible mistake and demanding a ‘recount’ is not good business! Do not be the person that everyone remembers for the wrong reasons.

If you can request some feedback do so, and take it on board. If you are having multiple rejections its likely you’re not selling yourself well, its worth re-examining your approach.

TEDx events are community events. Speakers are not ‘stars’ of the show, they’re a part of a community event. Try and remember the huge amount of resources allocated by the organisations and maybe re-adjust your approach going forward.

So there you have it! Thanks again to the people who fed in for their valuable feedback and if you have any questions or comments please pop them in the box!